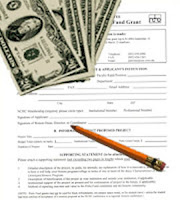 So now that we have settled into the rhythm of a new school year, we are ready to tackle our next great hurtle: Grant Writing. One of the reasons I wanted to work with HIPPY was the fact that we would be Grant Writing, which is a valuable technique to have. I was amazed to find out that there are people whose entire job is to sit, find, and apply for grants. So Liz and I have been busy learning how to write grants. Loads of fun huh, well actually it is kind of. I love a challenge and my perfectionist nature when it comes to anything that needs to be turned in is very OCD. The new CEO of the foundation, Gilbert Maldonado, is like the god of grant writing and partnerships. I think with him teaching us we will get so good at grant writing we can do it in our sleep!

I have always been able to write a good story, and wrote daily in my former life as a political consultant. In politics you are selling a person and his or her vision to people. Well in grant writing it is kind of the same thing. You’re trying convincing people that your vision and the good you do should be accomplished with their money while simultaneously proving yourself worthy of their time and money. In my pre research on grant writing I became confused and found the different styles interesting. I was perplexed and over whelmed until Gilbert explained it to me in a way I could understand. Don’t make it more difficult than it really is. Simple and funny even, but true none the less. I was beating myself up on the logistics thinking that it had to be a certain way when in all truth each grant is tailored more or less to the author’s style and perception.

Now that we have our first grant application under our belt, we are waiting for the results and preparing to write another one. Life is good and almost Always sunny in the Rio Grande Valley.
Posted by Esmi at 8:16 AM No comments:

The end of a HIPPY Summer 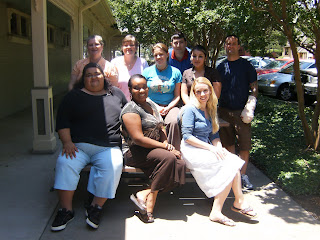 When the end of the universe comes there is one thing you can never say about the valley: It wasn’t very hot. This summer has seen some crazy temperatures. At one point a friend from Phoenix called me and said they were laughing at McAllen Texas because we were 109 and they were 103. Go figure. We survived the summer here at the HIPPY RGV outpost in thankfully a nice air conditioned building. It did go out once and everyone bonded as we pretty much cried in the corner with paper fans until the AC man got here, but at least he fixed it fast! It was a horrific combination of Lost and Survivor; those were the most terrible 3 hours of my life, okay not really more like a whole day and a half at the least.

Anyhow, my partner in crime Liz and I braved the heat as we visited different libraries and attended different coalition meetings spreading the word about HIPPY and how wonderful a program it is for our children. We made an awesome trip out to the mother ship in Dallas to see the Team and bonded with our fellow VISTA’s. It was a pretty awesome experience, because even though everyone is like a 12 hour drive away it made us feel connected into the matrix which is HIPPY*Texas.

Of course all good things must come to an end, and the summer of 2009 was a great one. It seems just as we were hitting a stride it became time to say goodbye to the wonderful days of summer. A flurry of excitement began both at work and at home as the new school year kicked off. Both Liz and I have small children and while my daughter was returning to P.SJ.A ISD for kindergarten, Liz’s little girl is starting pre-k at Edinburg CISD. As hectic as it was, it got worse as new guidelines for vaccinations surfaced, mandatory school uniforms, and we were pretty frazzled. The heat turned up for a bit hitting about 103-104 a day. I honestly had to tell my daughter to take her crayons out of the car because they melted into a blob in my backseat. I REALLY wish I had gotten them scotch guarded. Finally relief came this past weekend as the clouds rolled over us and chilled us out to a much needed and wonderful 82 degrees. We are back up into the high 90’s today but it’s all part of living in the Rio Grande Valley.

So now that we have settled into the rhythm of a new school year, we are ready to tackle our next great hurtle: Grant Writing. But that's for next time my grasshoppers :)

Goals as a HIPPY*VISTA Member

GOAL 1: VISTA members will engage the professional community as well as stakeholders and potential collaborators in the community resulting in the establishment of a School Readiness Task Force that will develop and implement a plan to increase parent involvement and school readiness in the community.

GOAL 2: VISTA members will engage parents in the community in school readiness activities in order for children to enter school ready to succeed.

GOAL 3: VISTA members will develop the infrastructure, partnerships and resources necessary to establish a fully functioning and sustainable parent involvement and school readiness program in the community.