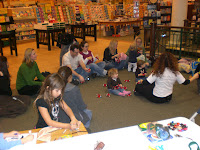 Last Thursday was Dallas HIPPY's Barnes and Noble Fundraiser. We disseminated a lot of our flyers and vouchers around to our different networks so that when people used the vouchers to buy anything at Barnes and Noble stores, we got a percentage of that sale. We got a special rate for an ad in the Dallas Observer, put up flyers around town, and posted the event on the Dallas Kids webpage of the Dallas City Hall site. Activities during the event included arts & crafts (the kids made winter crowns, paper plate reindeers, and paper plate snowmen), a raffle, a storytime with children's author Janie Bynum, and a music teacher who sang and danced with the kids. We also got a big cookie tray donated from Panera which helped bring people up to the tables so we could explain the fundraiser and the HIPPY program. The turnout of kids from our HIPPY schools was unfortunately a lot less than I hoped it would be but I think we accomplished our goal of spreading the word about the program- we talked to multiple people throughout the day about the HIPPY program and were also able to hand out some of Luis' brochures. I haven't heard the final tallies on how much money we raised during the fundraiser but hopefully we made at least enough to buy some new books/materials for the program here in Dallas. Thanks again to Luis and Cherri for helping me out!! Above is a picture of the music teacher and kids doing some crafts during the event. Merry Christmas everyone!

Goals as a HIPPY*VISTA Member

GOAL 1: VISTA members will engage the professional community as well as stakeholders and potential collaborators in the community resulting in the establishment of a School Readiness Task Force that will develop and implement a plan to increase parent involvement and school readiness in the community.

GOAL 2: VISTA members will engage parents in the community in school readiness activities in order for children to enter school ready to succeed.

GOAL 3: VISTA members will develop the infrastructure, partnerships and resources necessary to establish a fully functioning and sustainable parent involvement and school readiness program in the community.